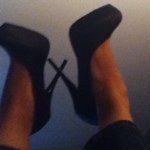 So the other day I was picking up my husband from the airport.  He had gone somewhere that was very difficult for me to deal with  and stayed for a number of days…so you can imagine that I was super happy that he made it back home.

On this particular day,  I decided to pick him up more as “Hottie” Muslim than “Haute” Muslim. Side note: Don’t judge me! Allah saw me way before your judgmental eyes read this post…

Anyway, as I rode to the airport on this beautiful summer day dressed other than myself, I began to think about how absolutely fine I felt and looked.  I noticed the stares from the men and women…and shamed to admit I liked the attention!  I had the window down, the sun was shining and I was singing my favorite songs!  As my eyes looked up to the rear view mirror and I caught a glance at myself, I thought…MILF!

Please make no mistake,  do not misunderstand this post! It is not a celebration of my Islamically inappropriate behavior.  Nor is it some “Hey, look at me” self esteem post…that’s for tomorrow (;  The entire point to this post is what my next thoughts were.  My very next thought as my eyes left the rear view mirror still celebrating my ample glittery cleavage was that Allah is not pleased.

My second thought was how easy it was for me to do it.  Yeah, I felt mad uncomfortable and even thought about 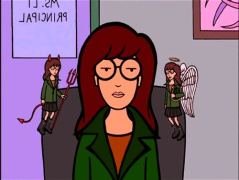 putting on a jacket.  But, it was like that cartoon angel and devil on your shoulder.  That day the devil won…This is the thought I want to talk about, because I really don’t need to expound of God’s thoughts regarding immodesty.  Striving… Anyway, I thought about how I could just as easily dress this way if  I wanted to…everyday.  I thought about how we all know what we are supposed to do and in different matters choose to do the exact opposite.  Whether it’s an agreement between two people, whether you feel it’s what God wants you to do, or whether it’s something you promised yourself…It could be something small to something big…but, the point is, we make these kind of decisions every single day.  It lead me to the thought that we should applaud folks for the small things.  Applaud folks that do what they say they are supposed to do.  I’m not saying that we should have some sort of parade or whatever, but damn this is a sick sad world…(Daria Flashbacks abound…) So, someone striving deserves some applause! Even if that someone is you!

Cuz I gotta tell you don’t nobody gotta do nothing, so when they do, when we do… make our word bond, support them/yourself.  I went out of the house with dressed as the Anti-Hijab, no lie, and it was easy, by comparison. I don’t have a problem dressing Islamically…not really my uphill road, got other issues…( Now I know, there’s some deep rooted spiritual illness that I need to deal with and trust, Allah is not done with me….He got it… Normally, though, I don’t go out the house dressed immodestly.) The point is we live in a world that is built on selling that we should be the exact opposite of the spiritual guidelines provided for us. Spouses aren’t supposed to cheat  and we know it…but, at the end of the day…we could do it if that’s what we wanted to.  So, even though someone isn’t supposed to…look at the world we live in.  Some people do not care…so when you have someone trying…If you are someone striving…focus on that and applaud the struggle.  Cuz, it is ordained and there isn’t one single reason why we can’t applaud when someone makes the right decision.